Why You Should Never Stop Testing

If you’re a regular Kolibri Games blog reader, you’ll know we’ve been talking about data recently. We shared some Idle Miner Tycoon Event Mine data, our CTO introduced our Data 2020 initiative, our Head of Game Data wrote about how data can drive Product Management, and we took a deep dive into one hour of IMT’s economy.

Because Data 2020 is an important initiative for Kolibri Games, we’re going to keep talking about it through a series of posts that track a player’s journey into and through Idle Miner Tycoon – from UA to Endgame – all with an overlay of data.

How do new players find us?

In our first post of the series, let’s take a look at why we’re always looking for new players, and some of the ways we can help them find us.

UA stands for User Acquisition. Very simply put, it’s advertising. It’s how we grow our audience. In order to be successful over the long term, Free to Play (F2P) games need a steady influx of new players. Churn in F2P games, even for the most successful, is high.

Industry-wide, mobile games have a D28 Retention of around 1.5%. That means that for every 100 people who downloaded the game, only one or two are back 28 days later. 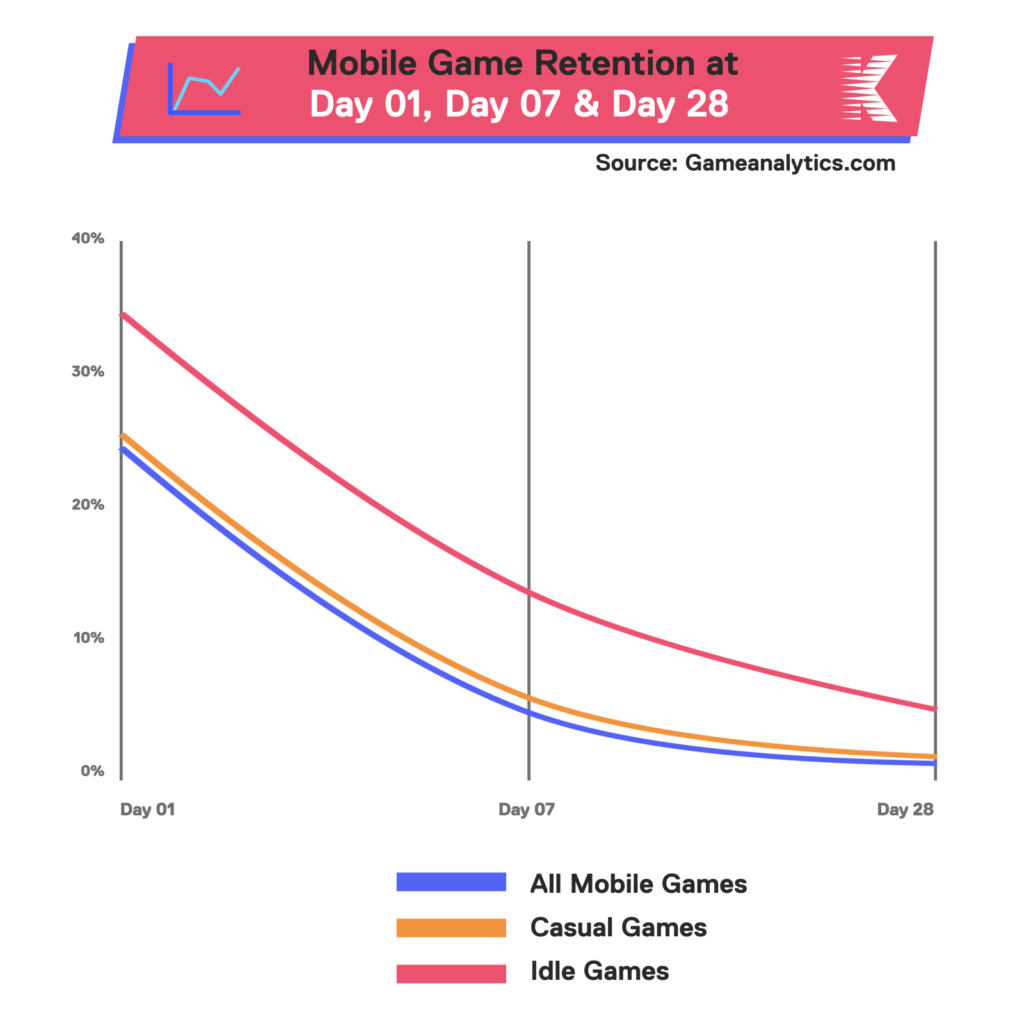 Casual games do better than mobile games as a whole, and we’re lucky to be in a segment that generally does better once again. Idle games, considered a segment of Casual, have an average 35% retention on Day 01, 14.5% on D7 and 5.5% on D28.

Still, that means that only a handful of those 100 players are still around a month later. And gamers aren’t shy to uninstall games when they don’t meet their expectations. 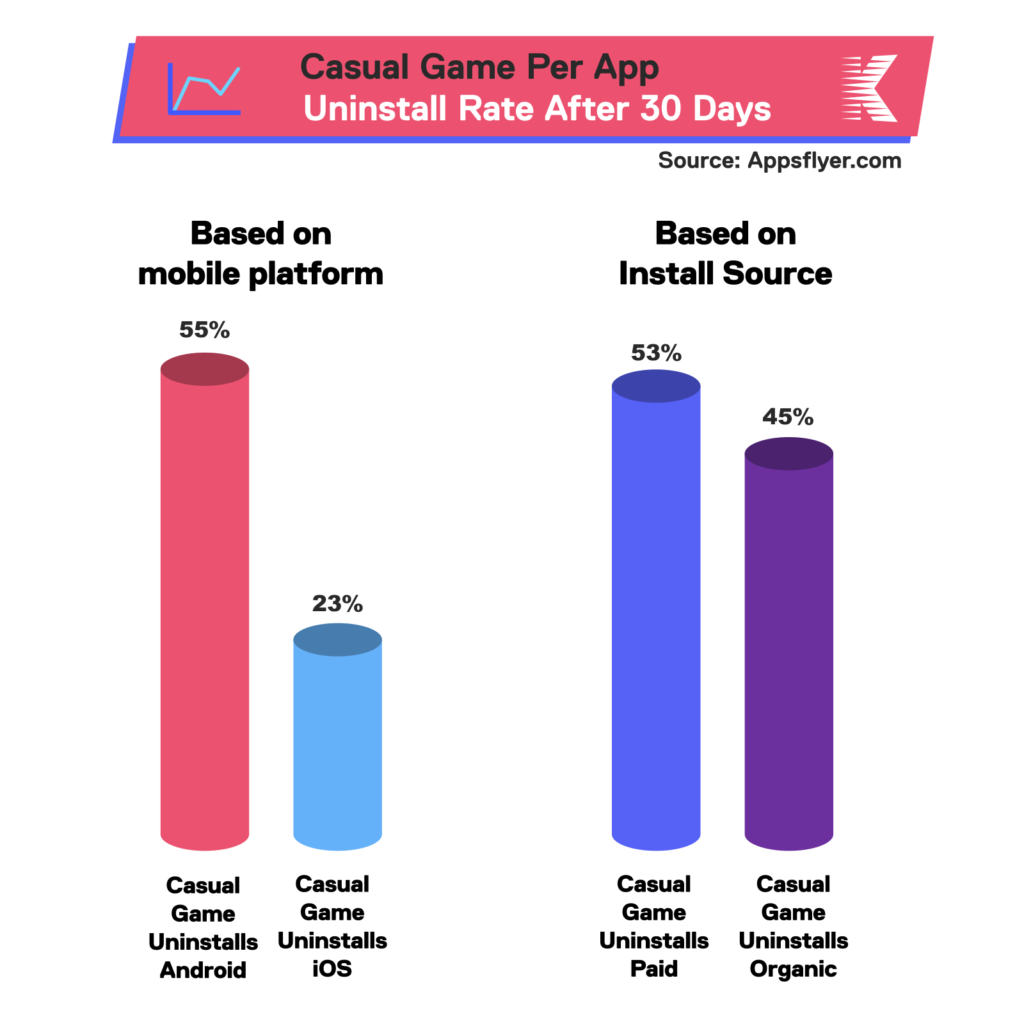 For the whole genre of casual mobile games, the average uninstall rate per app within 30 days is 55% on Android and 23% on iOS. Gamers won’t waste their time with games they don’t like, and they’re even harder on games they installed thanks to UA.

This means, in order to not run out of players, we’re always doing UA and we have to do it well. 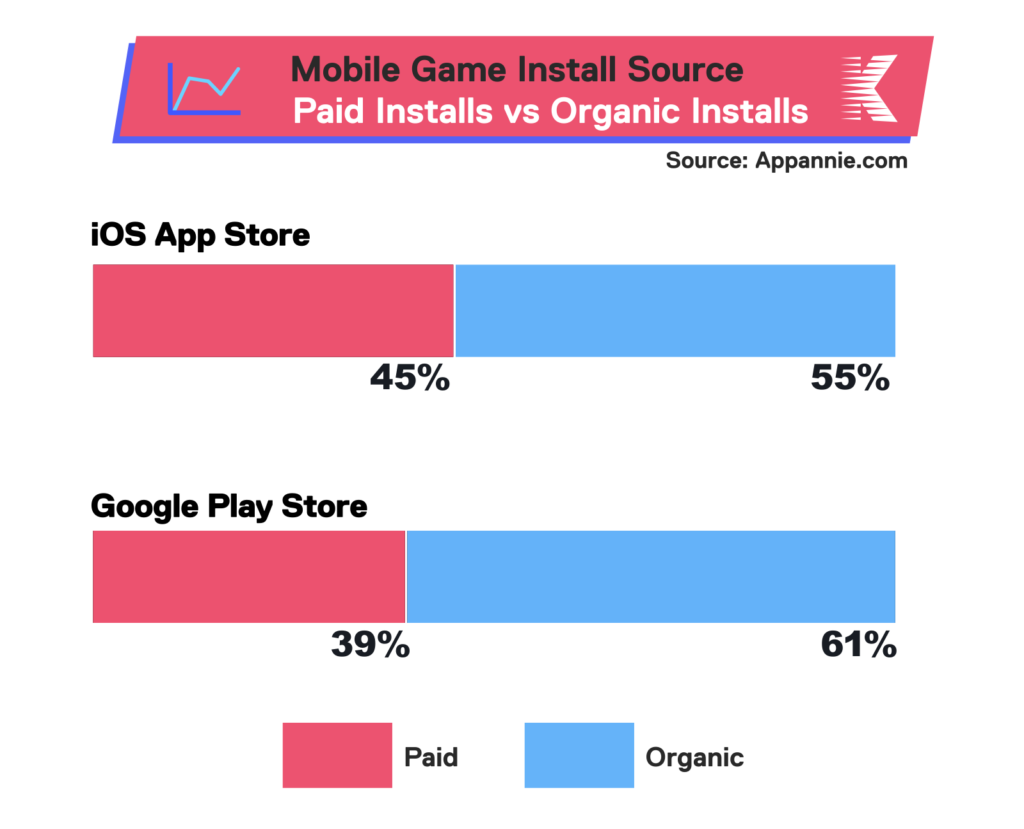 Organic installs are not linked to a specific ad run in a specific channel. Organic installs can come from word of mouth, seeing our game on your friend’s phone, or searching for Idle Tycoon games in the iOS App and Google Play stores. They’re hard to track and you can’t be sure whether a rush of new installs came from your game appearing in a television show or from a streamer playing it.

UA installs come from trackable ad campaigns we run on social media and through ad networks, like Google, Unity and Ironsource. In these, we pay the platform or host for every single install (we’ll go into this in detail in our next post).

If organic installs are important for growth, but we can’t directly influence them, what can we do? One thing is to make our game as easy to find as possible in stores. Searching for apps directly is how most people find apps. 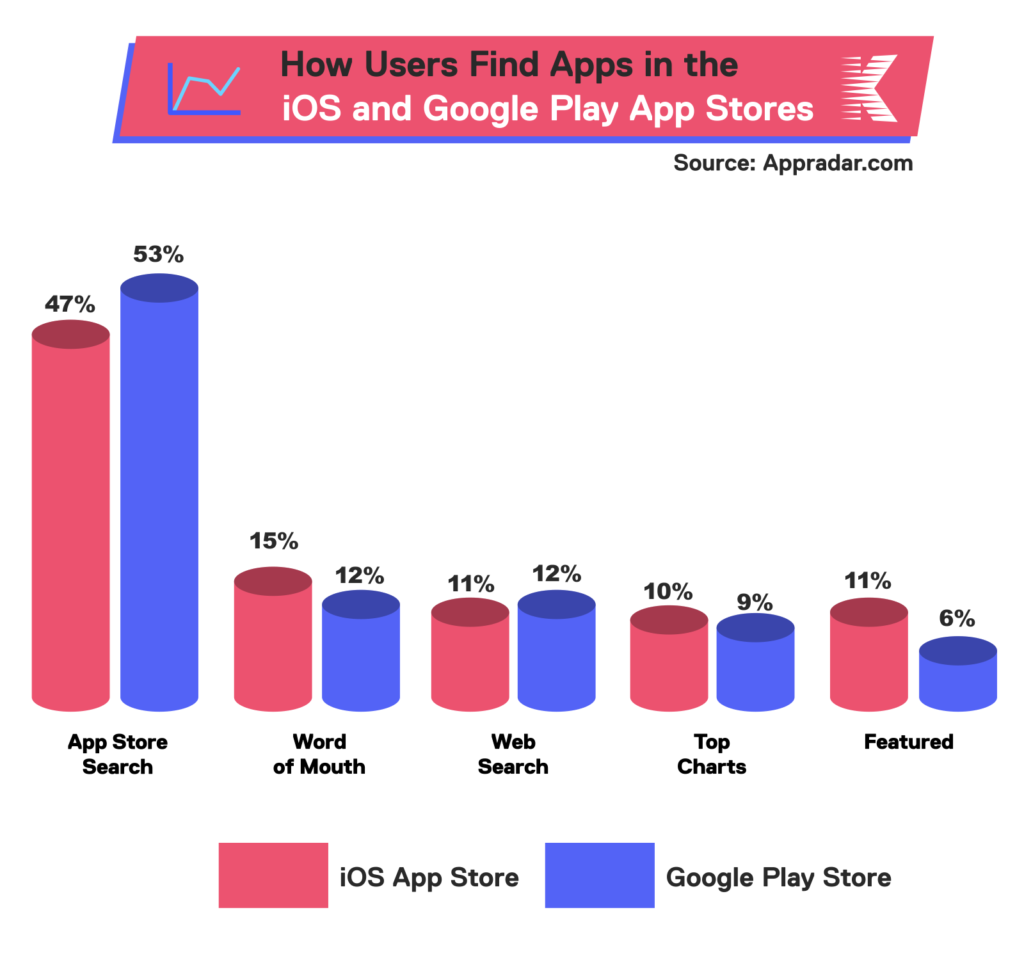 We help them find our game through ASO, App Store Optimization. Think of it as SEO for games. When players search, we want them to find our game! And once they’ve found it, we want them to install it. We can help by giving our games relevant, interesting keywords and compelling Visuals. We can find out which Keywords and Visuals are working best through Multivariate and A/B testing.

Multivariate and A/B tests use the same core mechanics, with the biggest difference simply being the number of variations being tested. A/B tests compare two versions, Multivariate tests compare three or more. Both allow us to make small changes to our advertising or gameplay and see how these changes affect player behaviour.

Let’s look at a fictional example of how we might do a Multivariate test to boost our app store presence. One of the variables we can test is our app name, which is indexed by both the App Store and on Google Play and is relevant when people search for games. It’s important to know why we are testing any variable and for this example, we’re starting with a hypothesis:

We might get more installs with a different name.

Obviously “Free Donuts” is a ridiculous name for our game, but we’ll keep it in for now.

We then set up our Multivariate test so that 70% of people who find our game via store search see our current name, “Idle Miner Tycoon: Gold & Cash. It’s working well for us, so let’s not change it for too many players, in case one of our new options stinks. 15% of searchers will see IMT: Digging Simulator, and 15% IMT: Free Donuts. In this example, we’ll run the test for seven days in the Google Play store and see what happens.

Turns out, IMT: Free Donuts is a great name! 90% of searchers who found our game with that name installed it. Total win, right? Well, we generally don’t do tests based solely on installs. Continuing in this example, what might happen if we tracked these players for seven days?

Now we see that after seven days, players who installed and played the game based on the title, “Idle Miner Tycoon: Digging Simulator” kept playing longer, bought more boosts and more season passes. That’s a huge win and we should definitely make that our new name!

This is obviously an exaggerated example, but things like titles, screenshots, game icons and description text build players’ expectations. We want to set the right expectations. We want to do everything we can to reach the players who will love our game, not just anyone simply because they have a mobile phone. Maybe “Free Donuts” was more exciting, but if it set the players up to expect a different game, it’s not good advertising.

Here are some of the other variables we might test. 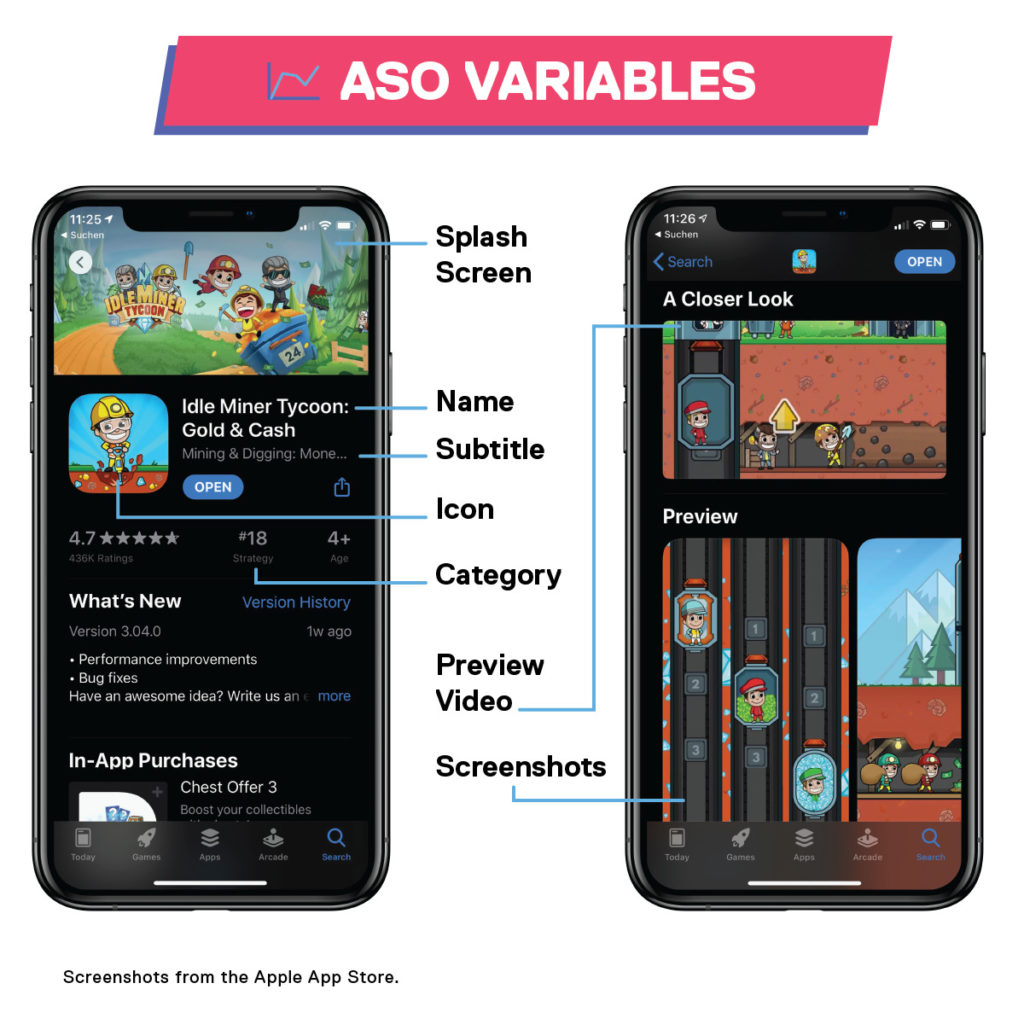 That’s ASO and organic search in a nutshell – and that’s how we get a big percentage of our players. The other big group, players who found our game via ads, we’ll talk about in the next blog post – stay tuned!

Looking for a job in UA? Check out our open positions below or over on our career page!