Welcome back to our series on a player’s journey into and through Idle Miner Tycoon. So far we’ve talked about finding new players through ASO and UA, and some of the metrics we track to measure how engaged our players are.

Now that they’re active & engaged, it’s time to talk about what they’re engaging with on a game design level. If you strip away the lore of the mines and the managers, what is Idle Miner Tycoon all about?

At its core, IMT is a progression simulator. Players are asked to progress through the game by managing their time via an economy of boosts, level-ups, Super Managers and other consumables. Every item in the game can be tied back to time, primarily in how they speed up progression for limited durations.

One reason why it’s such a compelling game is that there’s not just one avenue for progression. Players can progress through each mine by opening mineshafts, and leveling up their mineshafts, elevators and warehouses. They can then prestige each mine, boosting progression with every new level. there’s continent progression – unlocking every mine on every continent. Don’t forget Super Manager progression, and worker progression though our collectibles minigame.

In our core loop, players earn soft currency – idle cash – by spending time. Soft currency, in game design terms, differs from hard currency in that players can’t directly spend real money to buy it. Idle cash comes from each mine on a continent and players use it to unlock shafts, and upgrade shafts, elevators and warehouses.

Our primary hard currency is Super Cash. Unlike Idle Cash, players can buy Super Cash directly. In addition, we regularly inject it into our economy through advancement rewards, daily rewards, expedition rewards, and event mine rewards. Players can then spend Super Cash to unlock shafts, speed up unlocks and essentially boost their progression through the mines. Super Cash allows players to jump forward through the core loop, saving time in their mining.

What we want is for players to get satisfaction from both earning and spending our currencies. We’ve designed a core loop that’s fun and players love the return-from-idle animation showing them how much idle cash they’ve earned – but we don’t want them to hoard that cash! A game economy, just like a real economy, is healthy when money is constantly moving through it.

That’s one of the reasons we give out Super Cash in addition to selling it. Players who get free Super Cash are then likely to spend it – boosting their mines, speeding up their core loops, and making more idle cash. Once players see the value in using Super Cash, it’s our hope that they’ll then choose to purchase it themselves. Offering quick unlocks via Super Cash introduces the idea of its value. It speeds up a specific progression and increases Super Cash demand – thus it buys the player time,. Because our game is not competitive, player-vs-player, it’s okay to offer players these time boosts. It’s not pay-to-win because we are mostly endless progression.

So just how many players are regularly getting Super Cash and how many are spending it? 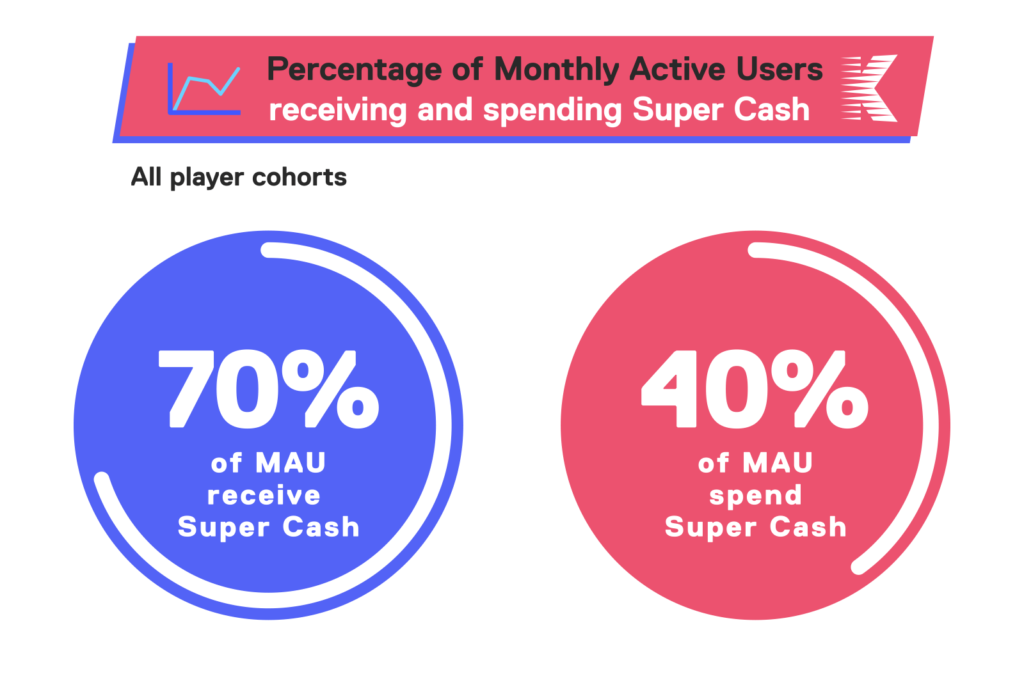 Looking at all users, it seems that most players  are saving their Super Cash for a rainy day! In an ideal “stable” economy, players would be spending Super Cash at the same rate they receive it. Let’s take a look at some of our cohorts in detail to see if the picture changes.

Breaking our players down into the now-familiar cohorts based on continent progression, it’s again clear that veteran players play differently than new players. 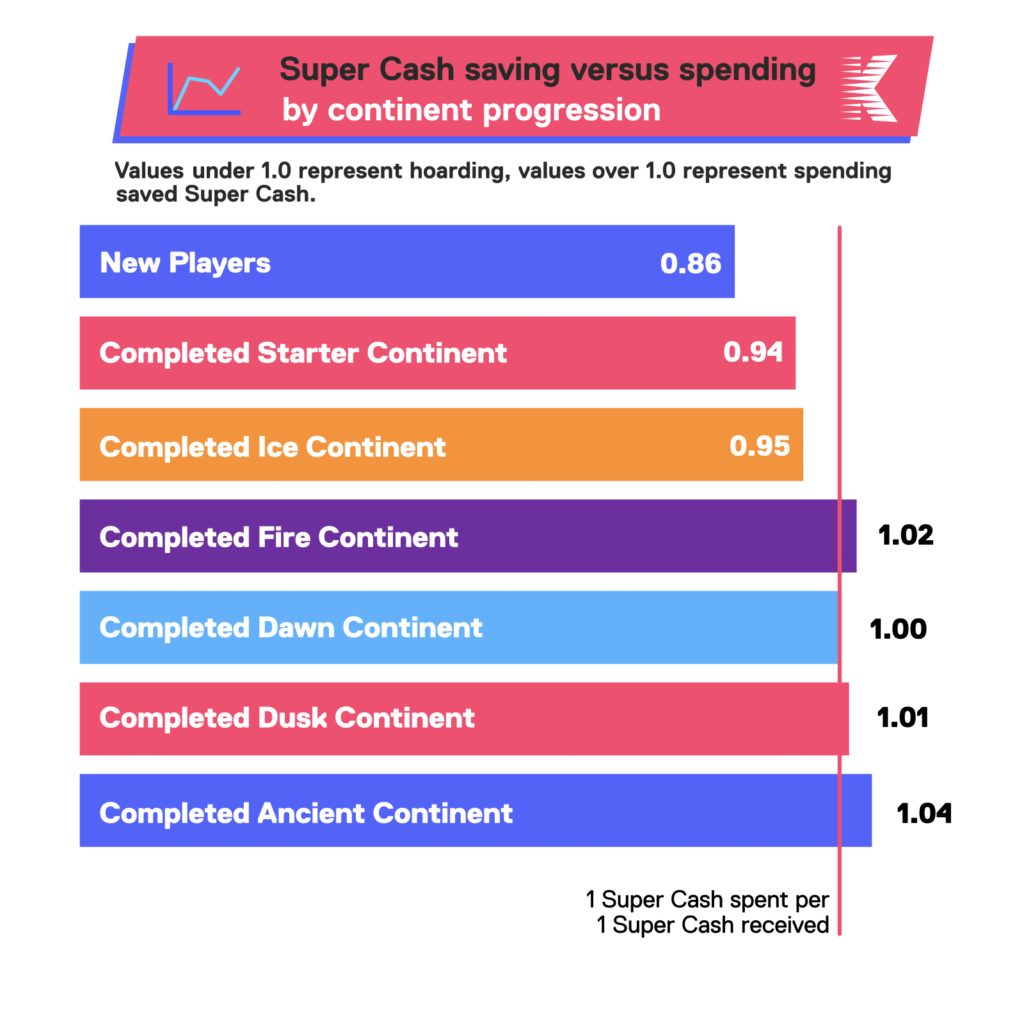 Generally-speaking, the further a player progresses, the more value they find in spending their Super Cash. But what are they spending it on? 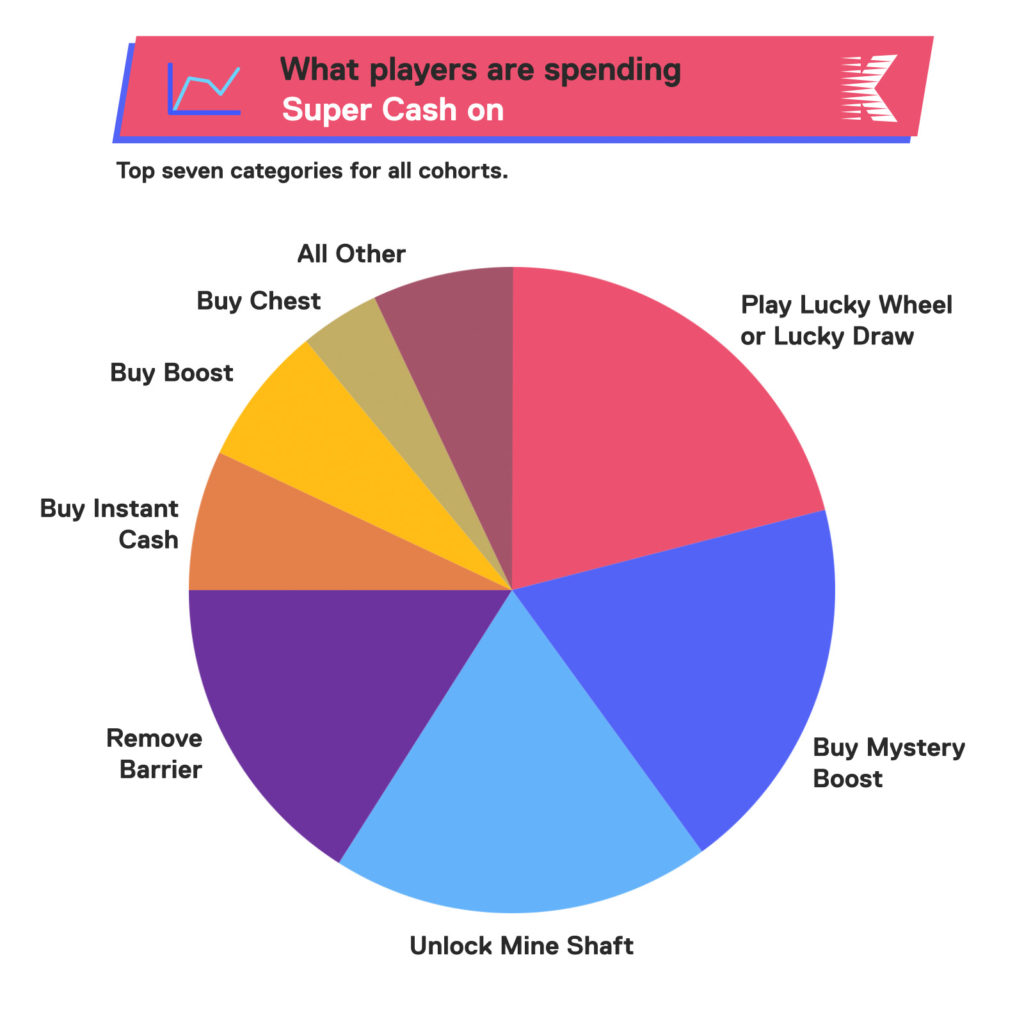 As always, this gets even more interesting as we break down spending by player category. 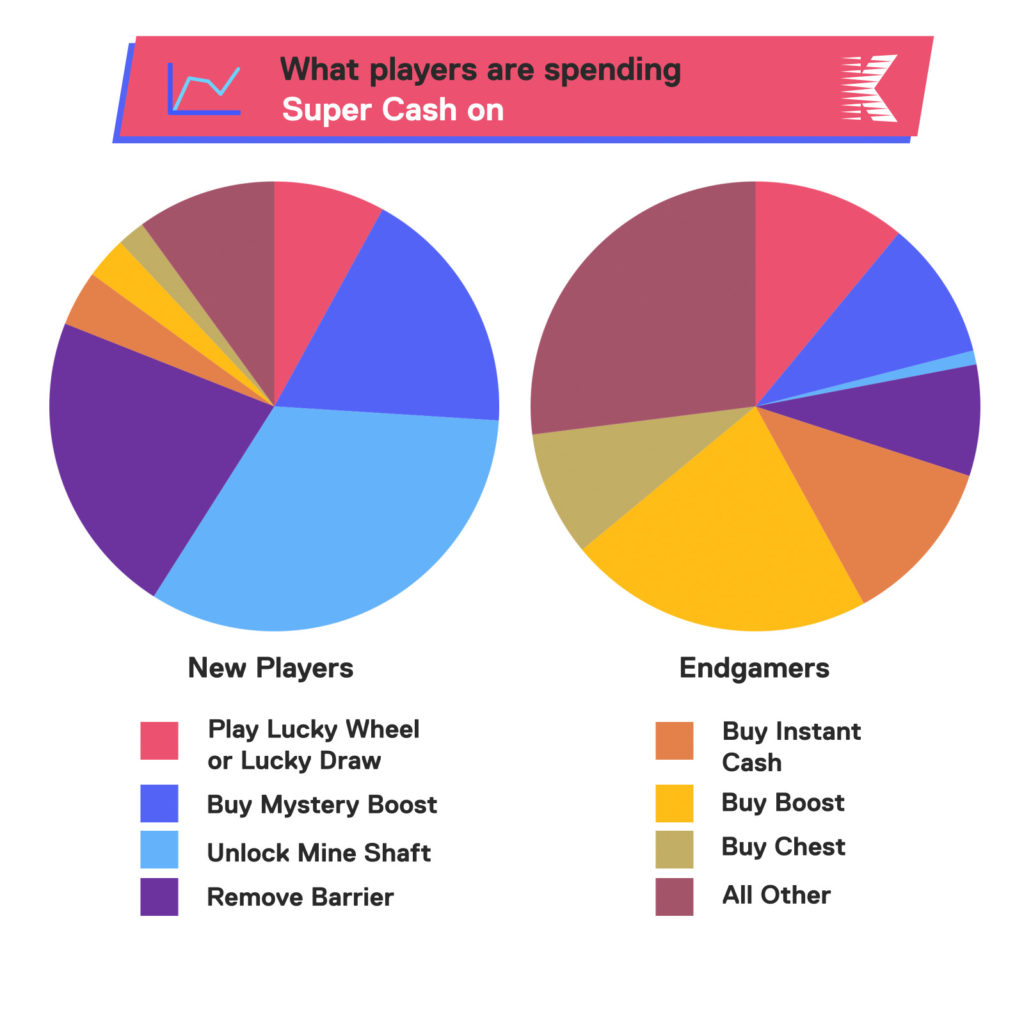 Boosts are one of our key consumables. Ranging from 2x mine income for an hour, all the way to rare 2,000x multipliers, boosts speed up progression and are invaluable in event mines and on Impossible Island.

Compared to Super Cash, players are much more conservative with their boosts. For all categories of players, they save a few more boosts than they receive over an average 30 day period. 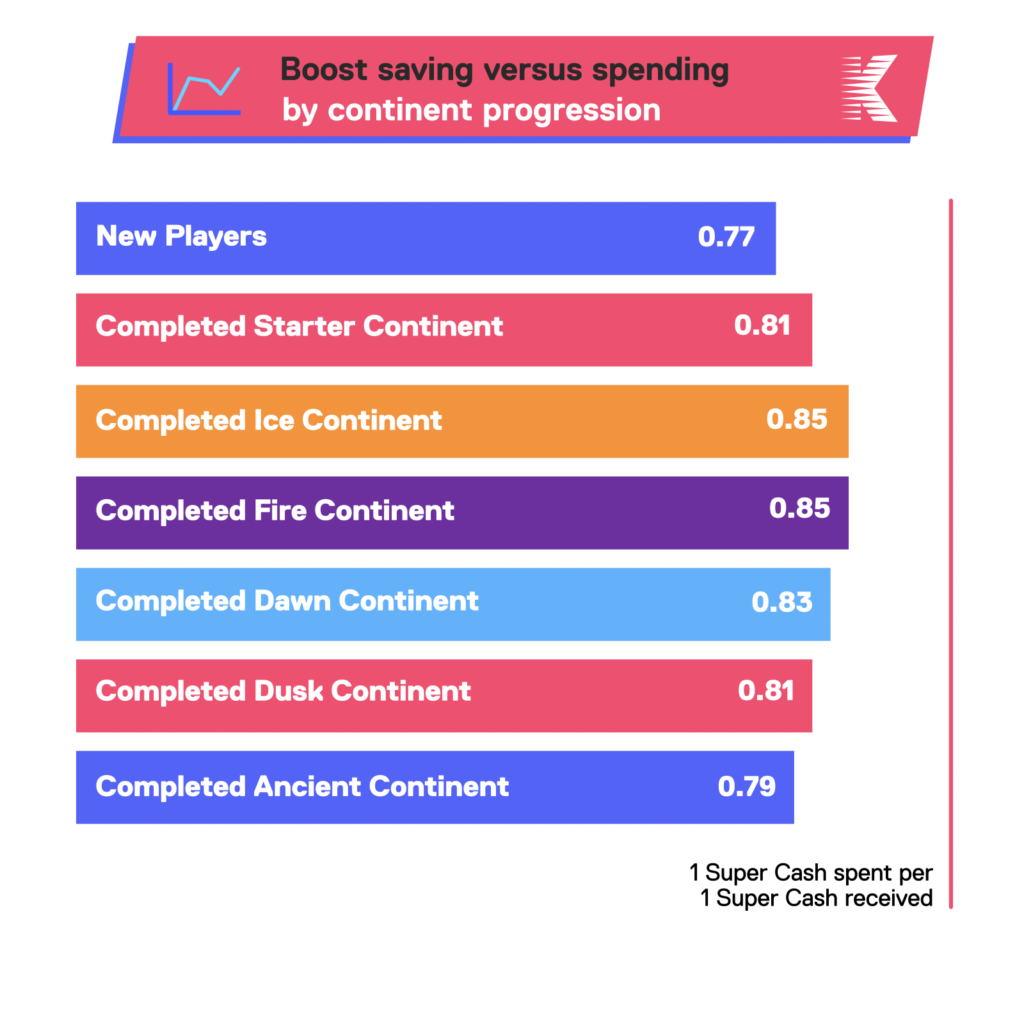 Like Super Cash, we want boosts to flow through the economy. Players don’t need them to progress, so some amount of hoarding is to be expected.

Even if players spend their boosts slowly, they do spend them, and mostly on the five main continents. This makes sense as all players, from newbies to veterans, engage with the main continents. Event mines are also a popular boost sink, since players are motivated to finish them as quickly as possible for maximum rewards. Of course savvy players know that boosts work across all mines, so that boosts spent in Mainland also speed up Event Mine progression, and vice versa. 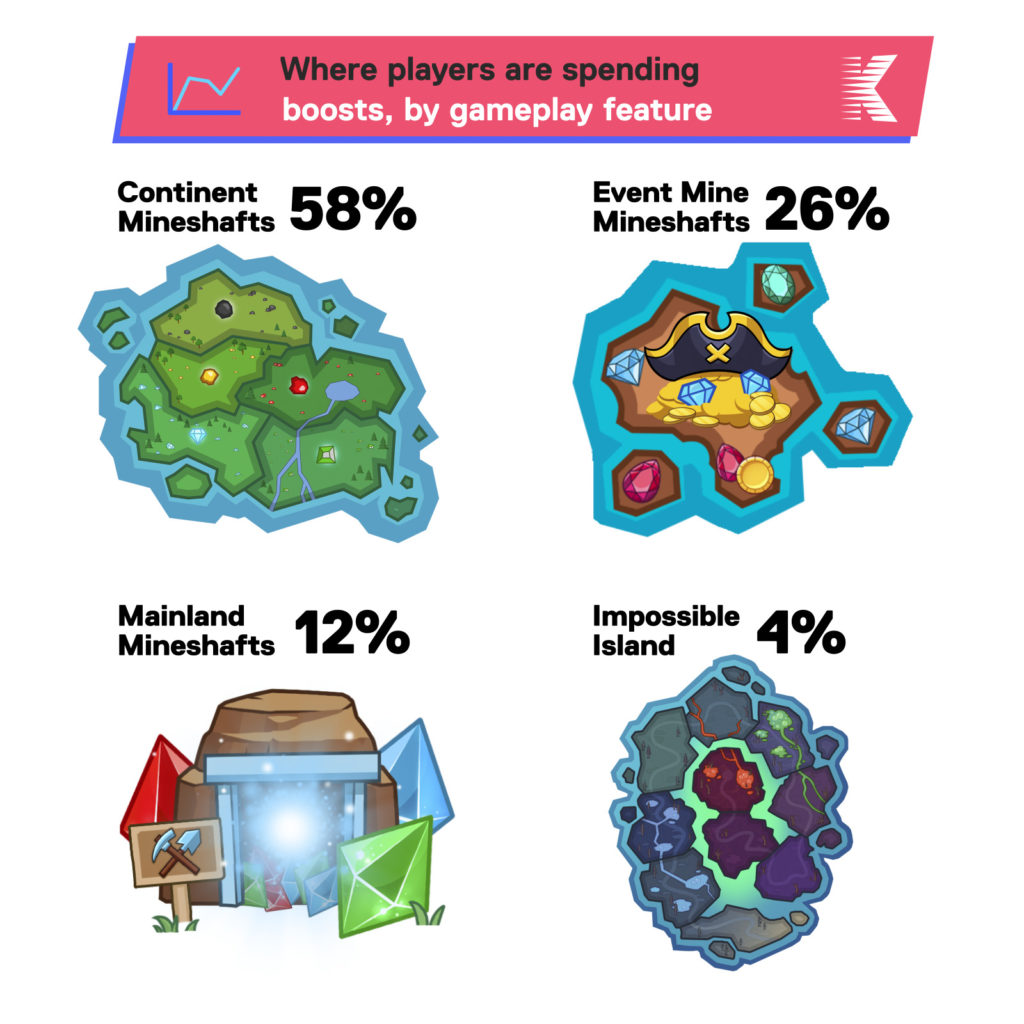 So where do all these boosts come from? Over half come as expedition rewards, as our craftiest players can complete five expeditions in a day and idly build up their boost library! 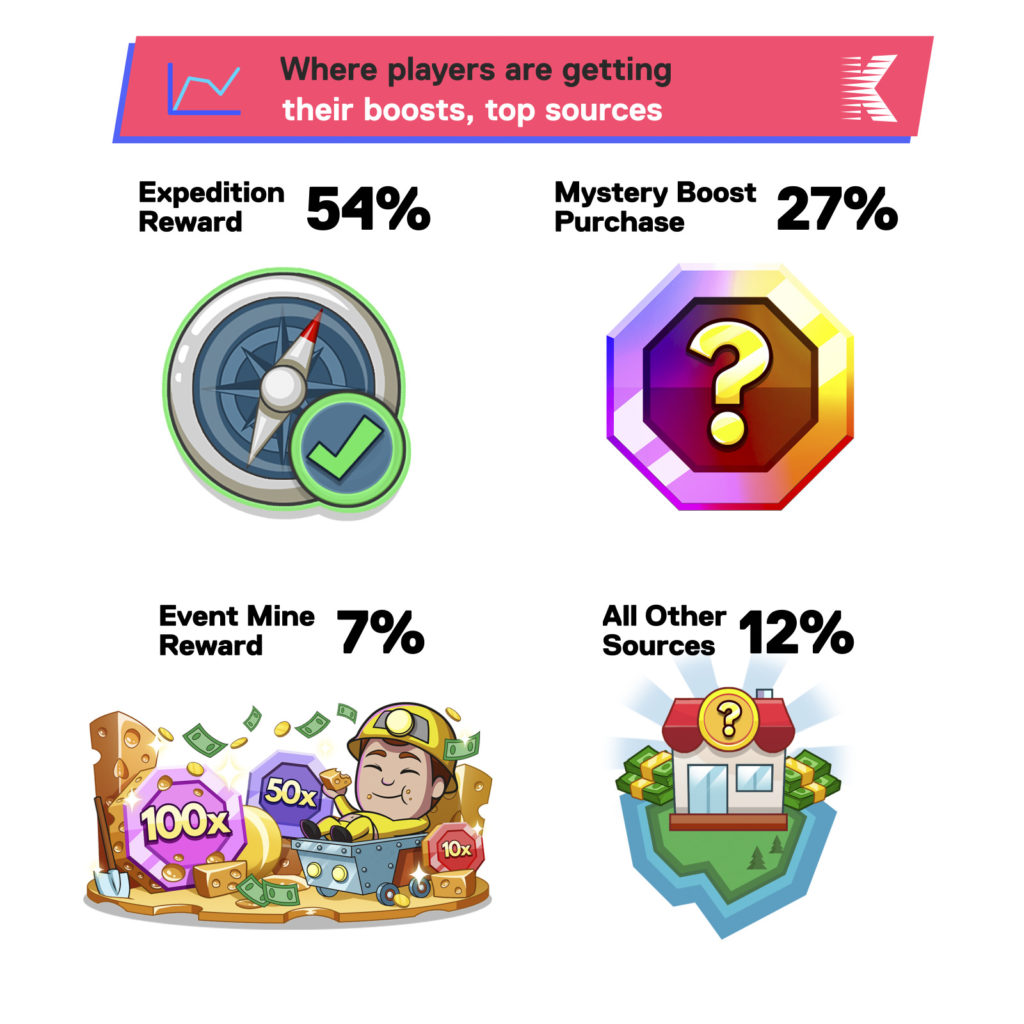 In addition to managing Super Cash and boosts, players – and our game designers – balance instant cash, gems, chests, collectibles, and skill points, all with the goal of maximising their mines and idle mining their way to the next progression reward. And from there on to the next…

Want to help build idle economies, or help our teams analyse them? Check out our open positions below or over on our career page!