Striving for Ownership in a Growing Company

Nate Barker, who recently moved to Germany from the United States, shares three ways in which Kolibri Games promotes personal ownership and explains how those improve day-to-day work…

There’s a big, silly-looking crown sitting on top of my coworker Jan’s head. It’s the type of fake-royal crown that puts the wearer to shame in our office. Well… that might be slightly overstated.

Actually, the crown signifies that the one wearing it is a “Critical Path” blocker for our process, and a successful release of the latest version of our game depends on them finishing this critical task. It tells others to leave the wearer undisturbed and help them whenever possible.

In Jan’s case, he is implementing unique visual effects for a new type of factory, a special “event” factory in our game Idle Factory Tycoon. For context, it means a limited time factory that produces things such as Christmas decorations in December but is only accessible a few days out of the year (you wouldn’t want Christmas decorations in July, right?). Jan has realized that his initial time estimation to add this effect was too short — so he needs total focus to ensure the feature makes it into the next update of our game.

This is one of the many ways in which Kolibri Games has developed a business culture that emphasizes personal ownership. 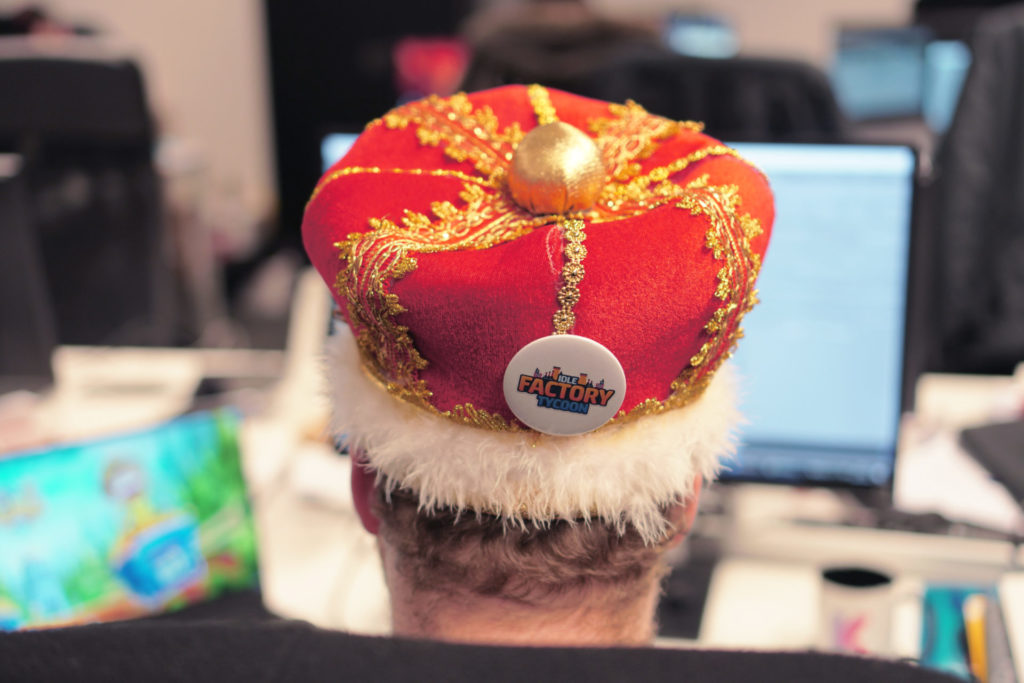 The “do not disturb” crown.

What does ownership really mean?

Ownership is a tricky thing at a modern company, where many hands will contribute to the completion of a task. This is particularly true for an 80+ strong mobile gaming company, where it would be impossible to design game mechanics, generate art, and build games if the management team spent time micromanaging every activity.

The games industry sits at the intersection of technology and entertainment — two industries rife with disruption. It’s impossible for even superhuman leaders to stay knowledgeable about the constant changes impacting their business. To resolve this, Kolibri employees set high-level objectives (e.g. improve retention or increase revenue) and then have a high degree of self-direction about how to achieve this.

Solutions to high-level problems need to be squared away with other business activities, naturally, but every employee is responsible for originating, planning, and executing these ideas all the way to the end. If the solution fails, the originator needs to know why this is the case, and how to avoid similar pitfalls in the future.

Look around, stretch, grab a snack to eat, read this post, check social media — if you’re doing any of those things right now (you’re doing at least one), then chances are you might be procrastinating. Procrastination is often viewed as a self-regulation problem, and the American fear of this derives from the Puritanical era with Jonathan Edwards’s sermon against procrastination. How do I know this? Procrastination… probably.

Procrastination can also be a leadership issue — where the responsibility to remove a blocker to our productivity falls on somebody else. For instance, this post was written before we even had a blog to display it on. Had I let that block me, I would have argued that without a blog to test formatting, there was no point in writing yet. And, since the job of adding the blog post fell on an engineer who was managed by somebody else, there was really nothing I could do but sit around and read articles by The Smithsonian. Not cool here at Kolibri Games!

Why would I let that delay dictate my timing? Reasons could range from fear of taking risks to the fear of making mistakes in otherwise sure-footed tasks, even to a carefree attitude toward the final product of my labor. These common thinking patterns have disastrous results and take some heavy mental lifting to overcome.

The most fruitful fix is to instill a level of personal ownership in the products. In some cases, this is achieved through stock options or bonuses. At other companies, this is achieved through fancy titles. These are useful strategies to employ for many firms, and at Kolibri Games, we encourage this thinking with small teams, limited project scopes, and clear direction from our leadership.

For instance — when originating this blog series:

In this way, I had a clear goal to write to, I understood the importance of the work we were doing, I knew the full scope of the work, and it was reasonable to complete in a short amount of time.

Too many cooks don’t just spoil the broth — they also lead to a thick obfuscation of responsibility. Tasks will remain suspended between employees until they’ve eventually inched their way to an inbox, then receive the bare minimum response and no clear directions to follow.

A few weeks prior to writing this at Kolibri, we realized the sudden importance of updating our game’s mostly empty sound design. What initially followed was a series of meandering meetings with plenty of stakeholders but no guidelines on where to go next. This happens when people are afraid of failure, have an overabundance of information to consider, or have unlimited time to reach a conclusion.

Time is not a metric. It must become the enemy.

When we realized several weeks had passed but the sound design still hadn’t moved, it was clear something needed to be changed.

The solution was to delegate the task to an ultra-small team. My job was to find the sound designers. My partner’s job was to implement the sounds in the game. That’s it. Just two. Executive staff might have an opinion on a sound or two, but the train was leaving with or without them.

Overnight we had results — freed from the tyranny of the group opinion, I found and signed a sound team, and my partner began adding their sonorous creations immediately.

Of all the challenges and advantages of working as an American in Germany, the high degree of personal ownership has the most democratic effect. With every employee charged with managing a key component of the game, and delivering said component to the final player, it is obvious where the buck stops. This keeps people accountable.

Furthermore, this accountability drives people to make the right decisions and work efficiently to see those decisions fully realized. Since we are each individually instrumental in making decisions, it means the company is truly guided by the whole team, and not just a headstrong few.

For instance, Game Designers are accountable to the players, so their ownership of player wishes and problems makes them representative of the community. Their interpretation of player opinions directs the game development strategy — what features are we heading towards. This is balanced with the artists and engineers, who are accountable for delivering the product and must take ownership of the scale and speed of tasks they tackle. They are in constant negotiation with what the designers need.

In this system, there is no King (or Queen) despite the crown. In reality, the tension produced by these differing parties is a key part of the process. The resolution to this tension is accomplished by the product managers, who ensure all voices are heard and the compromise is made between what is desired and what is possible. This distribution of power is fundamentally democratic, and an immense pleasure to partake in.

Eventually, by encouraging leadership, management and democracy in day-to-day work processes, Kolibri Games ensures that employees understand that the power is in their hands, creating a strong sense of ownership that is a key driver of success at the growing company.